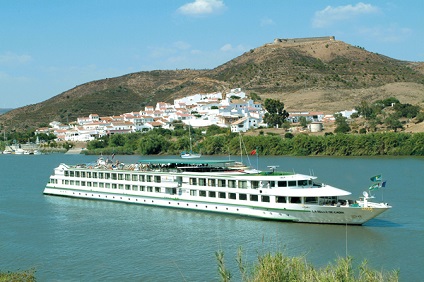 Immerse yourself in the heart of Andalusia between tradition, history and gastronomy. From Seville to Granada, this cruise will allow you to visit the cities and emblematic sites of this rich region of Spain. Discover Seville, the capital of Andalusia, which is full of joy and activity throughout its streets. You will be amazed by the old town which is home to amazing architecture and tradition. But also, by Jerez which has preserved an incredible architectural heritage.

Seville
Seville is the artistic, cultural, and financial capital of southern Spain. It is the capital of Andalusia and of the province of Sevilla. It is a city that is steeped in history, boasting many magnificent monuments and buildings, some which date from the 6th century.

One of the richest areas of the city is the Barrio Santa Cruz, with its narrow streets and whitewashed houses. Near here is the Plaza de España, designed as the centrepiece of the Spanish Americas fair, and on the edge of the beautiful Maria Luisa Park.

Other attractions in Seville include the famous Gothic cathedral, third largest church in the world; the Giralda, a Moorish minaret that is the city's landmark; and the Alacazar Palace, where Spanish kings and queens still reside. There are also many museums in Seville, including the spectacular Museo de Bellas Artes.

Cadiz
The city of Cadiz is located on a peninsula protruding into the Bay of Cádiz, the Isle of Leon, separated from the mainland by a narrow and torturous channel, part of much larger Gulf of Cádiz. Very high and thick walls surround the city presenting a very picturesque appearance from the sea.

Cádiz is of typical Andalusian character. The old part of Cádiz, commonly referred to as the Old City (Spanish Casco Antiguo), is shaped by the individuality of the various quarters (Spanish barrios), "El Populo," "La Viña," or "Santa Maria." These areas offer a marked contrast to the newer areas of town.

While the townscape of the Old City is largely formed by narrow alleys leading into a number of plazas, newer areas consist of wide avenues and more modern buildings. In addition, the city is dotted with numerous parks with old giant trees supposedly brought there by Columbus.

El Puerto is popular for its sherry and for its beaches, which are the town's principal tourist attraction. Well known beaches include Vistahermosa, Valdelagrana, and La Puntilla. Like many other southern cities, there are many smaller towns encompassed by the municipality. There is also a major port, known as Puerto Sherry.