11 Night Cruise sailing from Rome to Venice aboard Royal Clipper.

11 Night Cruise sailing from Rome to Venice aboard Royal Clipper.

Rome, Italy
St. Peter's, with its breathtaking Sistine Chapel, newly restored to its former glory; the Spanish Steps, where all Rome passes by; the Colosseum, where gladiators fought to the death, and the Pantheon, considered to be the most perfect architectural statement of the ages.

Ponza, Italy
The pastel houses of Ponza Town rise in neat terraced rows from the busy harbour where sleekly groomed yachts and ramshackle fishing boats moor side by side. Happily, there are few tourists here, so it's a delight to wander through the unspoiled town.

Taorimina, Sicily
Barreling under full sail through the narrow Strait of Messina past Scylla and Charybdis, where rock and whirlpool almost claimed Ulysses, you arrive in lovely Taormina. Perched on the shoulder of Mt. Etna, Taormina inspired Goethe to say that “It is the greatest work of art and nature.

Corfu, Greece
The lushest (and some say the loveliest) of all the Greek Islands, Corfu lies just a stone's throw from the Albanian coast. Nowhere is the stunning natural beauty of Corfu more evident than in the small village of Paleocastritsa, where legend says Odysseus was washed ashore to be rescued by Nausicaa.

Dubrovnik, Croatia
It was George Bernard Shaw who said, “Those who seek paradise on earth should come to Dubrovnik.??? Indeed, Dubrovnik is a treasure by any measure made more precious by its miraculous restoration. Crowned by the Minceta Tower, the 10th century city walls are the proud symbol of Dubrovnik's colourful history.

Vis Island, Croatia
Vis Island has been described as a pearl among Croatian Adriatic Islands that has been left untouched by tourism for many years. As it develops it is becoming more and more popular particularly with yachtsmen. The island is known for it's many beautiful beaches as well as it's fascinating history. The town of Vis was founded in about 397 B.C. as a base for the Greek colonization of the Adriatic Sea

Krk Island, Croatia
Krk is the largest island in the Adriatic, covering 157 square miles.It is also one of the most heavily populated with around 17,000 inhabitants. This means it is very well placed to receive tourists. Krk town is home to the famous St. Mary's Cathedral, built in the 12th century. There are many other ancient churches to visit as well as The Frankopan Castle and a Franciscan Monastery.

Cres Island, Croatia
Cres is a lovely place to visit which is easily reached both from the mainland and other nearby islands. It has many interesting places to visit including the Griffin Vulture Colony. Due to previous Venetian rule much of Cres Town reminds visitors of an Italian village and large parts of it date back to the 15th and 16th centuries. 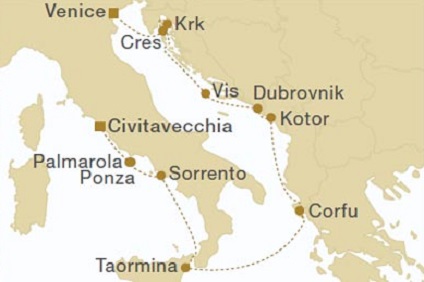